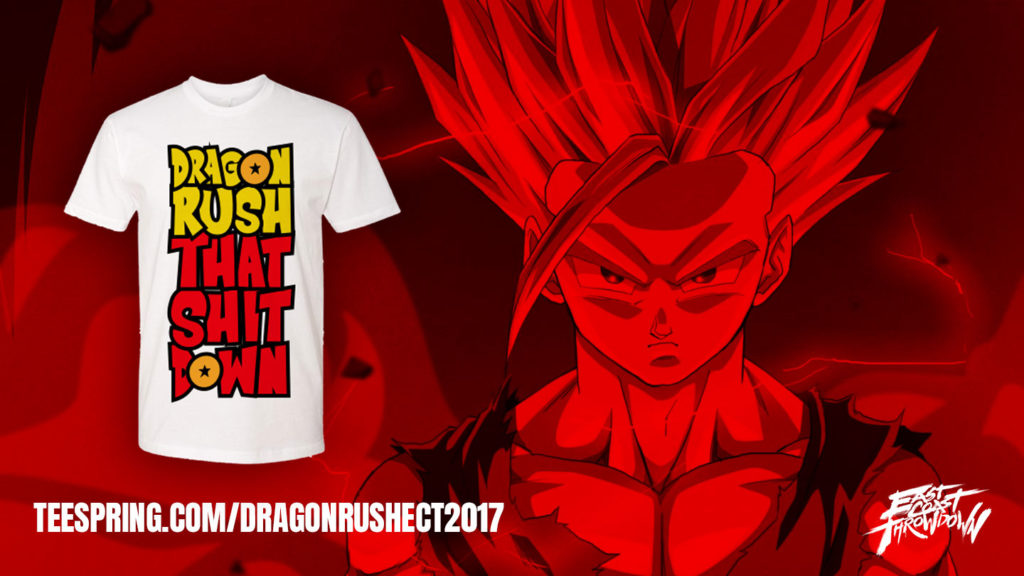 East Coast Throwdown is proud to announce the “Dragon Rush That Shit Down” T-Shirt Crowdfunding Campaign to support the Guilty Gear Rev 2 prize pool at ECT 2017. This shirt is inspired by the amazing new Dragon Ball FighterZ game announced at E3 2017 which is being developed by Arc System Works. As a way for us to show our appreciation and admiration for what looks like an incredible new fighting game, we thought that this would be great. We can’t wait to get our hands on the game and battle it out 3v3 with the likes of Goku, Vegeta, Cell, and Teen Gohan come 2018!

Buying this tee shirt directly supports the prize pool for Guilty Gear Xrd Rev 2 at ECT. With the Guilty Gear tournament at ECT already being a part of Burst League, we wanted to give our anime fans even more reason to register to compete for an even larger prize pot. The stakes have been raised, and in anticipation of Dragon Ball FighterZ which launches in early 2018, there is no better time to pick up Guilty Gear than now!

Dragon Ball FighterZ looks like it will become a tournament staple, with tremendous effort and attention to the details that the fighting game community looks for in a competitive esports title. As Jeff Ramos at Polygon put it,

Dragon Ball FighterZ takes the very best of what Arc System perfected in the recent Guilty Gear Xrd and paired it with what makes Dragon Ball’s anime such a spectacle to watch. And that’s where the biggest distinction finally begins to take hold.

From a source material perspective, the characters we know of so far that will be in Dragon Ball Fighter Z all look extremely faithful to their anime counterparts. With characters such as Teen Gohan even having supers modeled after key moments from their storyline with the Father/Son Kamehameha which famously took down Perfect Cell at the end of one of the most famous story arcs in anime history. Beyond just that, character movement and cut-scenes all look incredibly impressive as well. Even the sound design is something to marvel at.

Bringing back a 3v3 battle system while companies like Capcom, who made it famous with their Marvel Vs. series, are moving away from it is sure to attract players from across the fighting game community spectrum to at least try their very first anime fighting game. The reviews from the floor of E3 have been nothing but positive, and with the game at only 20% completion according to its producer, there’s a lot more surprises yet to come.

The aggressive gameplay combined with the ability to use both assists at the same time are going to make offense extremely strong in Dragon Ball FighterZ. The rush down will be extremely real, and extremely hard to deal with, in true team-based fighting game style. You will absolutely be dragon rushing that shit down. Dragon Rush is a universal unblockable move within the game, kind of like dust, sends your character across the screen towards the opponent and allows you to start your offense. The Dragon Rush has also appeared in previous Dragonball games, such as Budokai 3, and appears to have been dialed in perfectly by Arc System Works to work within the fighting system of a legitimate FGC esports game.

Arc System Works has truly outdone themselves with Dragon Ball FighterZ. From the art style and shading, to the gameplay and competitive nuances we can already see in this incredibly early version of the game. This game looks incredibly promising to say the least. We can’t wait to get our hands on it, and as more and more characters are revealed the hype levels will only rise. ArcSys has a huge opportunity with this game which has the potential to attract a ton of new players to the fighting game scene. Dragon Ball is a global phenomenon that has been around for over 30 years, and with Dragon Ball Super only growing the fanbase and exposing a younger audience to the series — the timing of this game couldn’t have been better. If the game turns out as its current trajectory indicates it will, this game may shape up to be one of the best, and most-played, Dragon Ball games (let alone fighting games) ever produced. Which leads us to the question, are you ready to dragon rush that shit down?